Will Mark Zuckerberg run for President of the USA one day?

Will Mark Zuckerberg run for President of the USA one day? In a apologetic article in C|net about internet.org Dan Farber suggests: “Who knows, one day… Zuckerberg could try running a real country.” Internet.org is the latest promotion campaign Facebook, Samsung, Ericsson, MediaTek, Nokia, Opera, and Qualcomm to connect every person in the world to the Internet. The group wants to bring Internet access to the roughly two-thirds of the world’s population who aren’t connected.

They show a lot of ambition but have no Specific, Measurable, Attainable, Relevant, nor Time-bound plan of realisation. Though this is what you would expect from engineers. Is this mere a reaction on Google’s blue-sky scheme, Project Loon, a plan to deploy Wi-Fi-transmitting balloons over the world’s most remote areas, as some say?  Of course competition plays a part, but there is more. It is about social engineering and it is about time people start to realise that.

END_OF_DOCUMENT_TOKEN_TO_BE_REPLACED

By the Economist, Crossposted from  warvictims on February 5, 2009, for fair use only 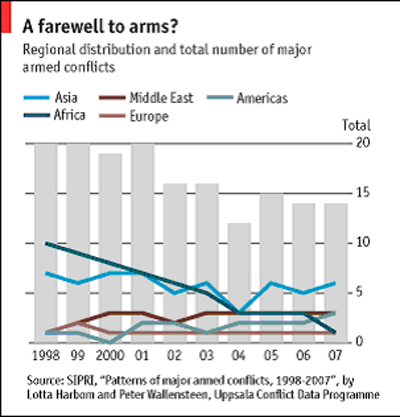 THE individual stories are dreadful: of families killed together in their sleep by exploding artillery shells, of thousands forced from their homes. Civilians in northern Sri Lanka are caught between advancing government soldiers and the crumbling forces of the Liberation Tigers of Tamil Eelam.

On Tuesday February 3rd the Red Cross in Colombo, Sri Lanka’s capital, reported that a hospital in Puthukkudiyiruppu town, in an area controlled by the Tigers, had been shelled again, after attacks at the weekend killed several patients. Aid workers and United Nations staff say the institution is a refuge for civilians. Sri Lanka’s rulers denied responsibility for the shelling, suggesting that the Tigers may themselves be destroying buildings, perhaps for reasons of propaganda.

Some 250,000 civilians are trapped in the north of Sri Lanka where the Tigers, suffering military defeats in recent months, are still being pummelled by government troops. As the Tigers lose control of territory-the government claims just 600 rebels are now fighting-they may yet switch strategy to guerrilla fighting, which in turn would leave civilians vulnerable. END_OF_DOCUMENT_TOKEN_TO_BE_REPLACED

The chilling article below, from this weekend’s (February 6th, 2009) Haaretz, appears at first to be disturbing simply for what it says about a growing segment of Israel’s next generation of voters-an open, even proud, racism and an attraction to fascism, in the form of support for Avigdor Lieberman, chairman of the Israel Beitenu party, which is poised to become Israel’s third largest party in Tuesday’s election. The key selling point of the party in this election is a “loyalty oath” that would be a prerequisite for citizenship rights, clearly directed at Israel’s Palestinian Israeli citizens.

But the article illuminates (or darkens) far more. Such as the horrifying prospect of highschoolers campaigning for Lieberman by screaming “Death to the Arabs!” in the streets and consciously explaining that this helps them prepare to enter the army. As the article quotes:

“Sergei Leibliyanich, a senior, draws a connection between the preparation for military service in school and student support for the right: “It gives us motivation against the Arabs. You want to enlist in the army so you can stick it to them. The preparation gives you the motivation to stick it to the Arabs and we want to elect someone who’ll do that. I like Lieberman’s thinking about the Arabs. Bibi [Benjamin Netanyahu] doesn’t want to go as far.”

The further you read, the clearer it is that this a phenomena that draws strength from so many of the issues facing Israeli society: not just virulent Anti-Arab racism, but a reliance on violence, the emphasis on militaristic values, the broken education system, and the crumbling of democratic principles. But perhaps, at root, the problem, as the article indicates, is this:

“The Israeli reality can no longer hide what it has kept hidden up to now – that today no sentient mother can honestly say to her child: ‘Next year things will be better here.’ The young people are replacing hope for a better future with a myth of a heroic end. For a heroic end, Lieberman fits the bill…. In a reality in which you can’t honestly tell your children, ‘Tomorrow will be better,’ in which the realization has finally sunk in that no deal or accord is about to happen, not now or 10 years from now – they react in a hysterical, survivalist fashion. In such a situation, the commitment to humanist values can be viewed as a luxury that we as a society cannot afford.”

The Yisrael Beiteinu youths gather for a final consultation as dozens of elderly party supporters slowly make their way into the white tent where the movement’s conference is being held, behind the Plaza Hotel in Upper Nazareth.

The youths, ages 16-18, many of them good friends from school, had stood for a long time before the event began at the intersection near the hotel, waving Israeli flags and shouting “Death to the Arabs” and “No loyalty, no citizenship” at passing cars. END_OF_DOCUMENT_TOKEN_TO_BE_REPLACED

more about “Human rights in the Video Republic?“, posted with vodpod

more about “London protest denounces massacre of …“, posted with vodpod

END_OF_DOCUMENT_TOKEN_TO_BE_REPLACED

An Interview With Ibrahim Awad (ILO)

more about “The Exploitation of Migrant Workers a…“, posted with vodpod

Protectionism for the rich, unemployment for the rest of us

Urgent call from fidh
The Observatory has been informed by the International Trade Union Confederation (ITUC) about the assault on Ms. Constantina Kuneva, a Bulgarian migrant worker and General Secretary of All Attica Union of Cleaners and Domestic Workers (PEKOP) based in Athens, which represents workers in the cleaning sector in the Attiki region, and the subsequent lack of adequate investigation by the Greek authorities into this assault.
The Observatory for the Protection of Human Rights Defenders, a joint programme of the World Organisation Against Torture (OMCT) and the International Federation for Human Rights (FIDH), requests your intervention in the following situation in Greece.

According to the information received, on December 22, 2008, Ms. Constantina Kuneva was the victim of an attack using sulphuric acid as she was returning home from her workplace. She was seriously injured, losing the use of one eye and of her vocal chords and she is still in a hospital intensive care unit. END_OF_DOCUMENT_TOKEN_TO_BE_REPLACED